It's been one of those days when I need some Movie Rx, so I turn once again to another Preston Sturges screenplay to lift my spirits. This film is directed by William Wyler and produced by Carl Laemmle Jr. as was yesterday's film, Hell's Heroes. What initially inspired me to pick this movie up was the appearance of Herbert Marshall. I first discovered him in one of my favorite early Hitchcock movies, Murder, which led me to watch Trouble in Paradise, which led me to pick up movies with Miriam Hopkins and Kay Francis as well, which is one of the ways I have ended up with so many movies, that has necessitated my resolution to try and watch a new movie every day. It's absolute folly, but I am truly enjoying the escape. 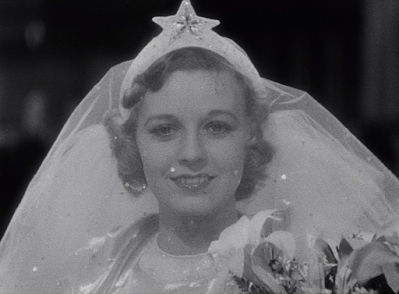 "Each day a goodly deed I place to my account in heavenly grace. A bank whose customers are blessed with peace of heart for interest."

Luisa lives in an orphanage that looks a lot like a sweatshop, regaling the younger girls with fairy tales, when she is requested to be an usherette at a movie theater. The head of the orphanage allows her to go on the condition that she perform one good deed each day in the outside world, warning her to be careful with the "male gender." After a benefactor gives her the chance to experience the finer things, she runs afoul of the Wizard of Oz who she has to deflect by claiming she's married. He decides to bestow gifts upon her invented husband to gain the privilege of playing chase with her around his hotel room. She decides to play good fairy by selecting a poverty stricken lawyer from the phone book to be the benefactor of her good deed, but when they meet and fall in love, it causes complications when the Wizard expects to collect on his investment.

The performances in this film are fantastic and enjoyable to watch. The story has elements of Little Red Riding Hood and Cinderella, with a lecherous wolf preying on an unworldly, innocent girl. It's rather sordid, though in the end, the wolf turns out to be rather tame, and there's a happy ending. It was just what the doctor ordered to buoy my spirits.
Posted by Christine at 11:36 PM