It's 104° with temperatures expected to rise even higher this week, and the only respite is the brief window of time from 5-6 am when I throw open the windows to suck up some fresh 70° air. You know it's hot out when the birds are panting and the squirrels lay splayed out on the pavement. Out on the street, you can't hear anything except the hum of air conditioners. Other than that, it's dead silent out in the oven baked air. 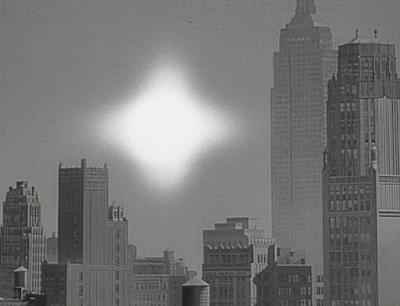 In the dark cave where I'm holed up, using several of what Rod Serling calls "man's little devices to stir up the air," I've decided to revisit an episode of The Twilight Zone that I recall whenever there's an extended period of extreme heat. I seem to remember reading a version of this episode in a book of Twilight Zone stories when I was a kid, though my memory is not always reliable. I'll have to dig that book out of my archives and read it again soon. 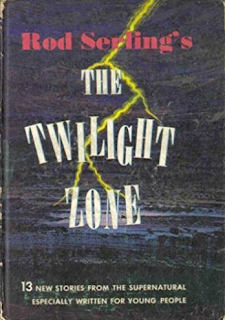 "The Midnight Sun" is one of those apocalyptic stories I tend to favor. It begins with a woman painting a portrait of the blazing hot sun outside her window. Rod Serling explains in the introduction that Earth changed its orbit, bringing it closer to the sun day by day, and that the sun still shines at midnight for our doomed characters in New York City. 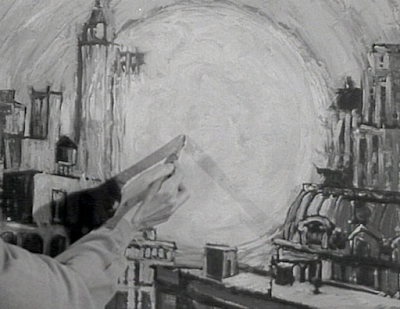 We learn that Norma and her landlady, Mrs. Bronson, are the only two people left in their sweltering apartment, after the last family took their chances on finding a cool spot up in Toronto, despite Mrs. Bronson's warning that, between the gas shortage and the freeways packed bumper to bumper, it wasn't such a good idea. She failed to mention the obvious fact that if the Earth is getting closer to the sun, going to Toronto to escape the heat is pretty futile. 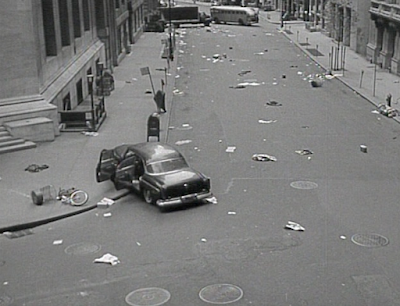 These two ladies are tough as nails, because even though they know they're going to burn up and die soon, they are staying upbeat and going about life as best they can, even without any men around to take charge of the situation for them.☺ Norma even put on a pair of pumps to go ransack the abandoned neighborhood store, telling Mrs. Bronson that it's the first time in her life she was sorry she was born a woman since she was only strong enough to carry one bag of groceries. She adds, "at least we won't starve anyway." Poor Norma didn't realize that her lack of strength had little to do with being a woman and more to do with her lack of strength training, as well as the heat exhaustion she is likely to be suffering. 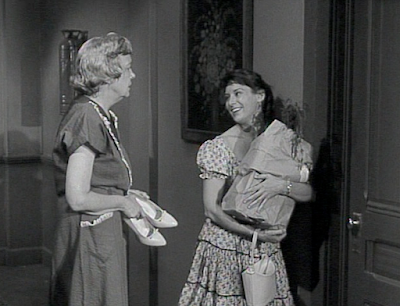 Mrs. Bronson gets so excited about the cans of fruit juice Norma pilfered that she snatches one from her hands as she unpacks the bag, dropping it to the floor when she clumsily tries to open it. She apologizes for acting like an animal, but Norma says she's just acting like a frightened woman. She laughs as she describes how scared she was running up and down the aisles of the store, grabbing things and knocking things over. 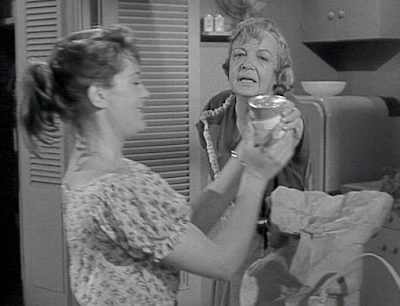 An announcer comes on the radio and shares a bulletin from the police department warning people to lock their doors and protect themselves with any weapons they have from looters roaming the deserted city streets, since most of the police force has been deployed to the crowded highways. The announcer continues with a weather report, indicating it's 110° with 91% humidity. When he gets to the forecast for tomorrow, he gets a little heated: 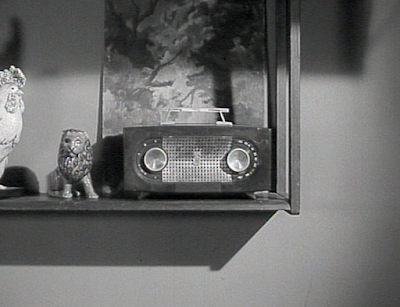 Hot. More of the same only hotter. (commenting aside) I don't care. Who are they kidding with this weather report stuff?

Ladies and gentlemen, tomorrow you can fry eggs on sidewalks, heat up soup in the ocean and get help from wandering maniacs if you choose. (aside) What do you mean panic? Whose left to panic? (laughs)

Ladies and gentlemen, I'm told that my departing from the script might panic you and...lemme alone! do you hear me? Lemme alone! Let go of me! (music begins playing) 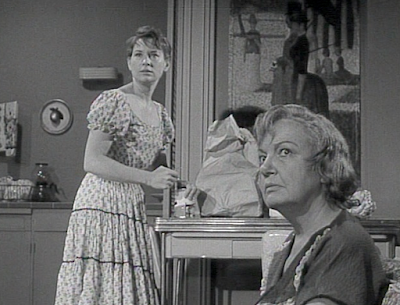 Does this cause Norma to collapse in a fit of anxiety? Heck no, she laughs it off. I'm the one who's chilled to the bone to hear it. They are toasting each other with fruit juice just as the power goes out, and with it, the radio, swamp cooler, and fan in Norma's apartment. She smiles and says the current is off again and drinks her juice. Mrs. Bronson says it stays on a shorter time each day and wonders what will happen if it doesn't come back on again, and starts freaking out about how much worse it could get without any power. She wanders Norma's apartment, sees her painting of the sun and asks her to paint something cool. She grabs the painting and throws it to the floor and beats it with her fists as she begs her not to paint the sun anymore. It is a nice painting though. She's really captured how frightening it would be to see the sun appear that large in the sky. 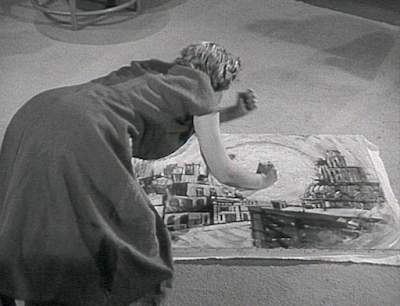 The thermometer is slightly past 120° when Norma wakes up, clad only in a slip. She goes to look out the window, with the shades up and the curtains open to get a better view of the approaching sun, and burns herself when she puts her hand on the window ledge. She goes across the hall to check on Mrs. Bronson in her apartment, who comments on how quiet it is. 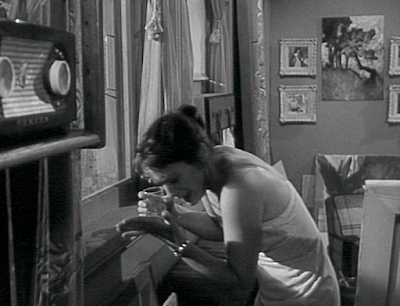 They suddenly hear a sound coming from the roof door, and as it opens, Norma hurries them both to her apartment and locks the door. There are footsteps in the hall and the door handle jiggles. I'm more scared than they are as a man says, "Come on out, baby! Come on out and be friendly. I aint got all day." Norma grabs a gun that's nearby and clicks it by the door and tells the guy she's got a gun and he needs to leave them alone. As she looks out the window to watch for him to exit the building, Mrs. Bronson begins to unlock the door before Norma can stop her. 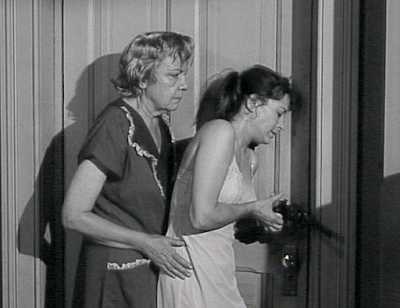 A man barges in and Norma points the gun at him, but he grabs it away from her and says, "Crazy dames! It's too hot to play games," which is a cute little rhyme. He's obviously loco because he's wearing a suit jacket over his bare chest, which doesn't seem appropriate for the weather. He grabs the bottle of water from her fridge and guzzles most of it and pours the last few drops over his head. He sees one of her sun paintings and asks if she did it, and says his wife was a painter. He tells them his wife and baby died from the heat. He cries and says he's really a decent man and wouldn't harm them. He begs forgiveness for being off his rocker and leaves, asking nobody why they don't just burn up already. 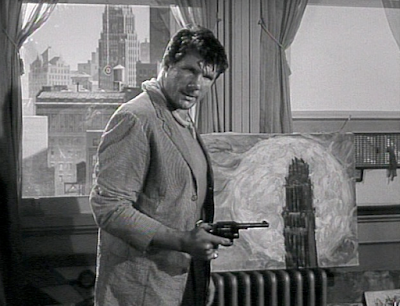 Mrs. Bronson sobs until she notices that Norma has painted her a picture of a cool rushing waterfall. She's delighted to see it and goes on about a waterfall she's seen and asks if Norma can hear it and says they should swim in it. She goes to the burning hot window, placing her hands and face against it as she continues to talk about the waterfall, and then falls over dead. Norma goes to her, calling her name as she cradles her head. She looks up and sees the paint melting off all her paintings as the mercury breaks through the thermometer. She screams and falls over dead too. 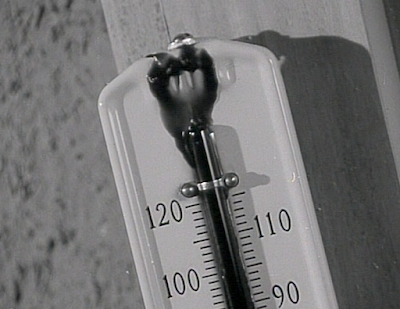 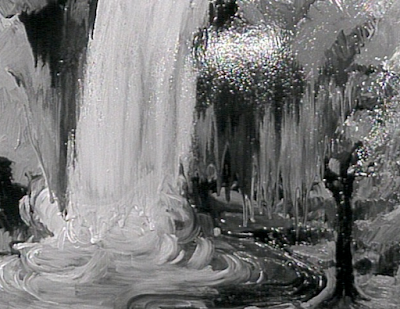 Now before you start going over all the parts of this story that couldn't really happen, fear not, it was all just a dream! Norma said at the beginning she had a crazy thought that she would wake up in a cool bed, so I guess she knew. The thermometer reads -10° and Mrs. Bronson crams some folded paper under the window to block the snow coming in from outside. Norma has just had a really bad fever and has a doctor peering over her as she is lying on her couch. Mrs. Bronson explains that she's been very sick but she confirms with the doctor that she'll be okay now. 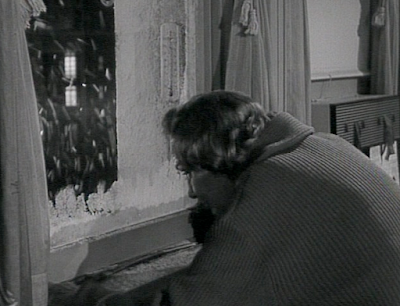 They walk over to the window and Mrs. Bronson tells the doctor she heard a scientist on the radio explain how the Earth changed its orbit and is moving away from the sun. She tells him that in 1-3 weeks, there wouldn't be any more sun and they'd all freeze. It seems unlikely that the sun would not be visible in that short amount of time, but maybe it will turn out that Norma is still dreaming. 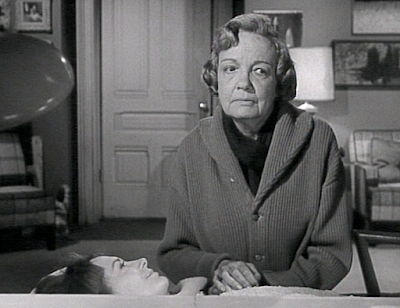 Rod Serling leaves us thinking about "the extremes of how the Earth might conceivably be doomed," so that we can all have pleasant dreams when we lay down to sleep at night, wondering if it would be better to freeze to death or die from intense heat. It's a terribly frightening episode that plays on our fears of doomsday being caused by the Earth becoming uninhabitable. It's supposed to be 108° here for the next two days. I hope the paint doesn't begin to melt on my paintings. 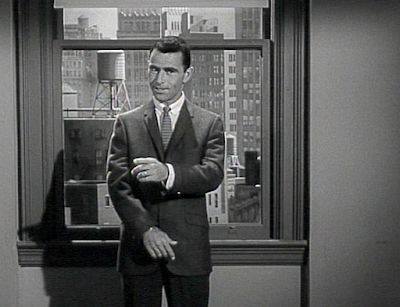 Just watched this tonight, and I enjoyed reading your recounting of it. I was particularly taken by Betty Garde's (sp?) portrayal of Mrs. Bronson, though she did seem a bit too chipper when she was explaining to the doctor about how they would all probably freeze in three weeks.

Thanks, Jaytee! Mrs. Bronson's chipper attitude is rather jarring, though it makes it seem like she was experiencing some level of hysteria over the impending doom.