This post is my entry in the Disaster Blogathon, hosted by The Midnite Drive-In and Dubsism. Follow the links to indulge yourself in a deluge of disaster films.

Deluge captured my interest back in 2017, soon after its release by KL Studio Classics, mostly because it was a pre-code disaster film that was once considered lost, but also because it featured an appearance by Sidney Blackmer, who would later play Roman Castavet in Rosemary's Baby. I am always interested in seeing early film appearances by actors I first encountered in their later years, and Blackmer has an impressive filmography I may need to explore further. This film was directed by Felix E. Feist, who also directed some other well known movies I've seen: Donovan's Brain and The Man Who Cheated Himself. Be forewarned that I intend to share the events in this film in its entirety, so be prepared for spoilers. 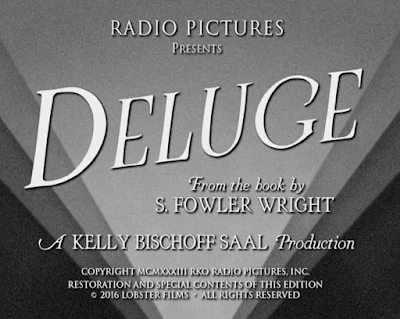