Season of Horror: The Quatermass Xperiment (1955)

I've shared this before, but I love it so much I'm sharing it again.
You can find Bob Wilkins on Facebook.

Tonight I'm watching The Quatermass Xperiment--a movie I've known about for some time, that I'm finally getting around to watching.
Posted by Christine at 11:59 PM No comments:

The problem with having way too many movies, aside from not having the time to watch them all, is that it's sometimes difficult to decide what to watch. That's not the reason for my absence, and while the Season of Horror hit a bit of a lull, it is not over yet. I'm back this evening with something completely different.

On this day in 1966, Bob Wilkins was showing Invasion of the Saucer Men and Return of the Fly. I am watching neither tonight, but would like to think tonight's selection would fit in well on Creature Features. I hesitated before picking up El barón del terror aka The Brainiac. The plot sounds utterly ridiculous, but the reviews I read about it were so enthusiastic, I was convinced I should watch it. Producer and star, Abel Salazar, who played Enrique in El Vampiro, is tonight's brain sucking Barón, so it can't be all bad. I am watching the Spanish version with English subtitles tonight from CasaNegra Entertainment. An English dubbed version is also available on a separate audio track if you have a disdain for reading subtitles.

The opening titles are shown over bizarre images recycled from the opening of El espejo de la bruja, which also shares director Chano Urueta. The action begins with the handsome Barón Vitelius Destera being tried by the Inquisition in 1661 for using witchcraft, necromancy and for generally being naughty and seducing married women and maidens. He had been sentenced to torture, but as he laughed and joked his way through it, the inquisitors decided to stop the torture and are now deciding what they should do with him. 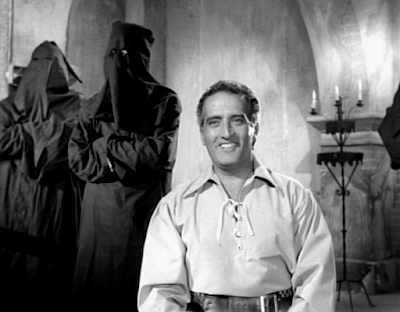 "I want to love you and adore you above all else. But I can't. My hatred is stronger than my love."

It is said that horror films help us to purge our negative emotions, which leads me to revisit Rosemary's Baby tonight, because I recently found myself repeatedly saying some of the same words Rosemary says in the movie. It's also a really great film and always fun to watch.

Since it's Saturday night, when I like to remember my favorite horror host, Bob Wilkins, here's an interview he did with Anthony Daniels (C-3PO) that is completely unrelated to tonight's film, but who cares because it's awesome.

Who would have imagined that a simple La la la song could be so haunting. A few things I've noticed that I hadn't noticed from viewing in the past is that our camera man, William Fraker, from Outer Limits and Incubus (among many other great films) is Director of Photography on this movie. I was also surprised to note that it's produced by William Castle. I already was aware that Roman Polanski wrote and directed.

"This is no dream. This is really happening!" 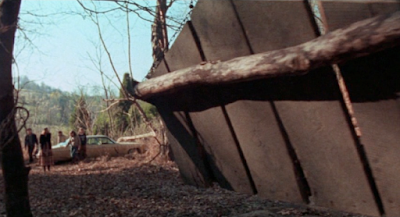 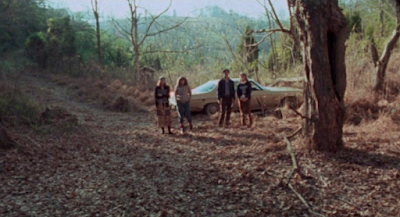 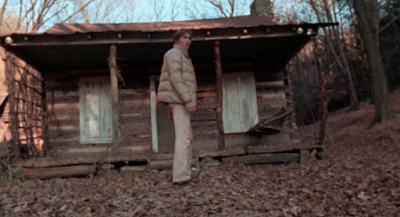 It's my favorite night of horror and it would seem appropriate to remember Bob Wilkins tonight by sharing an interview he did with one of the actors in tonight's feature, William Shatner.

Incubus was directed by Leslie Stevens, the man who created The Outer Limits. Conrad Hall did some wonderful cinematography on that show and his work on this film is simply beautiful and awe inspiring. Dominic Frontiere also worked on TOL and provides the eerie music in this film. Unfortunately this film was lost for many years and the best available copy found was subtitled in French, and the English subtitles that are superimposed over them often obscure some of the lovely camera work. I recommend watching with the French subtitles if you can. I forgot to mention this movie was filmed in Esperanto, which really makes it a special film. It is available on DVD, with terrific special features which include an awesome interview conducted by David J. Schow with Anthony Taylor, Conrad Hall and William Fraker, as well as two commentary tracks, and some notes on The Curse of Incubus. 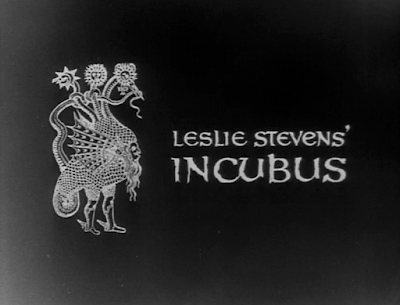 I started watching Don't Look Now last night, and at the time was thinking that perhaps I should have listened to the title. I got sleepy and couldn't finish it, so I decided to watch the rest tonight to see if it would redeem itself. It did pick up in the second part I watched tonight, or it could be that I was more alert than I was last night. The movie is beautifully filmed, and certainly comes to a horrifying conclusion, but what leads up to it is somewhat confusing, and at times feels disjointed. It gives the sense of being in an unpleasant dream and is quite unsettling. This is a movie I'll want to revisit and watch in one sitting before going into detail about it. I'll share a few shots and will warn you before I show the horrifying conclusion, which you should avoid if you want to see this movie. 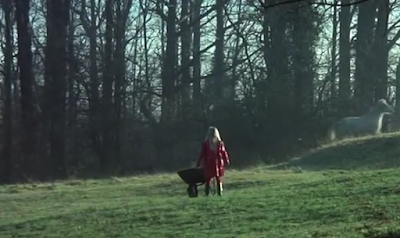 Back in April, I registered for this course on Hollywood: History, Industry, Art that was initially set to begin in July, during the dog days of summer when I had loads of time to take an online course. The course has finally begun today, in the midst of my folly to try and watch as many of my horror movies as possible, in the course of also watching daily Dark Shadows, while at the same time neglecting the not so new latest releases from two of my favorite authors, Robert McCammon and Stephen King. I'd like to try and post weekly about what I'm learning, but we'll see what I'm realistically able to do. 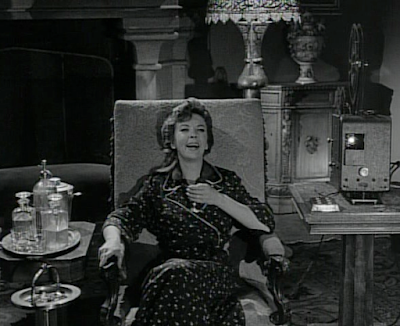 The course looks very interesting and you can still sign up, so if you're interested, check it out.

Posted by Christine at 11:59 PM No comments: