The Chinese Fan is the fifth episode from the serial, The Active Life of Dolly of the Dailies from the Edison production company, and runs for fourteen minutes. The other episodes are currently lost, and this one can be seen on Lost and Found: American Treasures from the New Zealand Film Archive, which also includes three reels from the first feature film credited to Alfred Hitchcock, The White Shadow.

The notes included on the DVD explain that there was an increasing popularity in serials featuring adventurous young women around 1913, many with alliterative titles: Perils of Pauline, Hazards of Helen, and Exploits of Elaine. The plucky heroine of this adventure is having adventures in a predominately male workplace. It may not be what you'd expect from the time period, which makes it fascinating to watch. 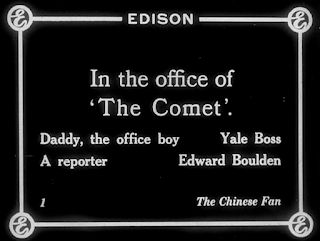 "A reporter is bound to come in contact with the seamy side of life. That is why Dolly has interesting adventures."

I first saw The Man Who Laughs back in 2011 when I borrowed the Kino DVD from Brother John, and enjoyed it so much I had to purchase my own copy. I am glad I did, because it's a hard title to come by these days. Although I'd seen Nosferatu, Phantom of the Opera and The Cabinet of Dr. Caligari, I had not yet begun avidly collecting and watching silent film. This was a film that gave me a newfound appreciation for 1920s movies. 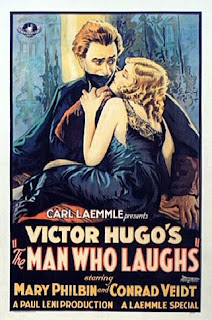 This is a Universal film produced by Carl Laemmle, founder of Universal Pictures, whose son brought us the Universal Monsters. While it is a silent film, the soundtrack that accompanies it features synchronized sound in the form of wailing wind, sounds at a fair, and crowd sounds. The sound on this DVD is not in the finest condition and there is some degree of hiss, but the music on the soundtrack definitely has that Universal Pictures flavor. I found some of the sound effects to be a bit distracting (a lot of horns honking) and did not do much to enhance the action onscreen. It is as disappointing as the synchronized sound that was later added to Phantom of the Opera, and what you might expect from practitioners experimenting with a new medium.

Some of the intertitles have a decorative, flowery background. The film is based on a story by Victor Hugo and is directed by Paul Leni. It features Mary Philbin from Phantom, Conrad Veidt from Caligari and Olga Baclanova, who would later be known from her appearance in Freaks. Lon Chaney was intended for the part of Gwynplaine, but was working for another studio at the time. He would have been superlative, but Conrad Veidt proves himself more than adequate. I recommend checking out moviediva for some interesting background information on this film. 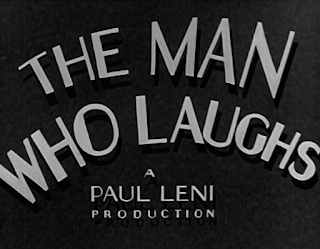 "Hear how they laugh at me-- nothing but a clown!"

I was supposed to be posting about The Man Who Laughs (which is forthcoming), but instead got caught up in New Year's festivities and new projects. 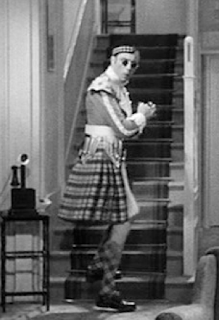 I decided to spend the New Year revisiting a favorite film I discovered this year. It is brimming with wit and intelligence and I love it completely. It seemed appropriate to bring in the new year with its good humor and satire. I was sorely tempted to write about it, but this film is so rich and so wonderfully detailed that it will take me a considerable amount of time to do it justice. I also hope to maybe tone down my fervor a little as I may be overdoing it a bit. You know how it is when you find a film that really resonates with you that you thoroughly enjoy. You want everyone else to see what there is to love about it, and your overenthusiasm tends to be lost on them. Nevertheless, it is something I expect to complete in 2017. 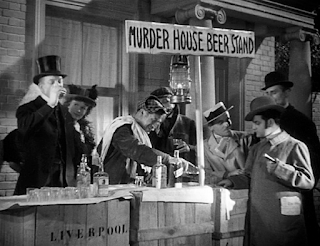 The new project I'm working on is blogging about The Invaders, a TV program from 1967. I'm not entirely sure what has possessed me to overextend myself by taking on yet another blog, though I will attempt to explain my reasoning. I will be posting on Tuesdays and will be covering the pilot episode on January 10th, the date it first aired fifty years ago. 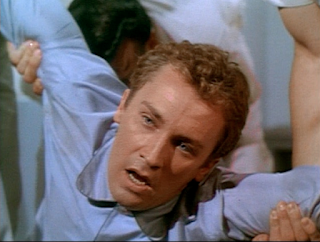 I anticipate that 2017 will be a year when I depend on the escapism of classic movies and TV to keep me happy and at peace. Hopefully my internet litter may bring a little joy to the world gone mad.


Posted by Christine at 5:00 AM No comments: 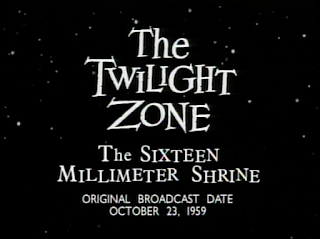