I'm still here on the earthly plane, in case anyone was wondering. It was disappointing to come to the cruel realization that it was not feasible to complete my daily movie mission when I was just beginning a glorious celebration of cinema with French February. I had some fabulous French movies lined up that I just wasn't able to dedicate the time to enjoy. I suppose I was determined to attempt this impossible task for the second year in a row because my underlying motivation was to reclaim some personal time, in addition to making some headway in watching the many movies I've collected but not yet seen. Perhaps some of you cinephiles can relate. So many movies, so little time.

Fortunately, some of my work demands have recently decreased, allowing me more time to indulge myself in the Pre-Code Paramount collection of films on The Criterion Channel. This is a wonderful collection of fascinating films from this era. While I've seen the majority of these films, I would gladly revisit all of them again. I recently discovered This is the Night, which has an unfaithful wife (Thelma Todd) trying to cover up a planned romantic getaway to Venice with her lover (Roland Young) from her javelin throwing husband (Cary Grant in his film debut), who has returned home sooner than expected from the Olympics. This is a funny, lighthearted film that provides a nice getaway from these dark times. Some of the pre-code delights include the chauffeur accidentally disrobing the unfaithful wife on a number of occasions, and a man who is tricked into buying what he believes are naughty cards of Parisian beauties. 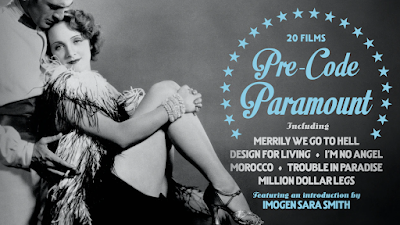 Sorry you weren't able to continue your streak. I was hoping for some pre-code pointers. I've leapt into a few and have really enjoyed them.

Million Dollar Legs is a hoot as is Trouble in Paradise. The Cocoanuts is a given.

This second, I am watching Murder at the Vanities and am stunned. There is just so much there, and not all of it good. Some of the songs are so bad that you'd think the melody was being made up on the spot. There is an ode to marijuana. The number of extras scantily, and otherwise, clad is amazing. I guess this is where Felix Unger got his Some Secluded Rendezvous song. Lucy is said to be in there somewhere. Duke Ellington shows up. Not saying it is great, but it is interesting.

Your reaction to Murder at the Vanities is the same one I had, Don. It is a jaw dropping experience for sure. Everyone should experience it at least once. Interesting to note that it's directed by Mitchell Leisen, who directed a number of other interesting films, as well as a few episodes of Twilight Zone and Thriller.

Since the Paramount pre-codes are leaving CC at the end of May, here are a few you may want to catch:

DESIGN FOR LIVING-Another witty Ernst Lubitsch film with Miriam Hopkins getting it on with Frederick March and Gary Cooper. Edward Everett Horton tries to get in on that action.

I'M NO ANGEL-If you've ever wondered what's the deal with Mae West, this is one to check out. Outrageous outfits and innuendos galore.

THE CHEAT-This sordid film is one to watch for Tallulah Bankhead and Irving Pichel. Even better if you can catch the 1915 version by Cecil B. DeMille to compare. You can see that version here: https://www.youtube.com/watch?v=tLW8U7aP5KA

MURDERS IN THE ZOO-I haven't actually seen this one yet, but being described as "startlingly perverse even by pre-code standards" makes it hard to pass up. I'll let you know what I find out.