Tonight is a foggy night that is ideal for watching an old dark house mystery that features Lon Chaney as a mad doctor, which is what inspired me to pick up The Monster. 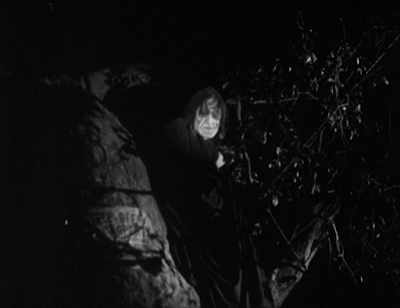 "A human monster watched with cat-like eyes for a victim."

Johnny Goodlittle has just earned his detective diploma through a correspondence course, complete with starter kit that contains a badge, handcuffs, and a gun, which is all he needs to solve the mystery of a wealthy farmer who has gone missing. It turns out that some inmates from a nearby sanitarium have been deliberately causing car accidents to try and find just the right specimen for mad Dr. Ziska's experiments. When Johnny and the girl he's sweet on, along with his rival for her affections, become trapped in the asylum, Johnny is forced to use his ingenuity to save the day. 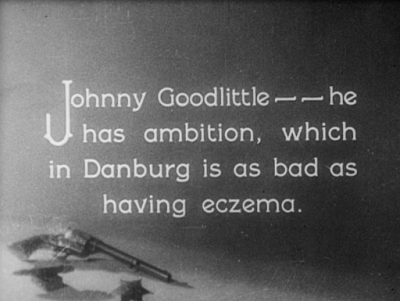 This movie started out with a fantastic, suspenseful score as we see some creepy characters collecting a body from the wreckage of an accident they deliberately caused, and I was thinking the movie was off to a great start. In the next scene the music changed to a dopey, slapstick score with some jokey title cards (which were admittedly funny) as our protagonists are introduced, and I began to wonder what I had gotten myself into. Fortunately, the action took off again, the sinister score returned, and while there were still moments of levity, they did not hinder the suspenseful action onscreen, and I found myself enjoying this movie. It was a fun movie to watch with some impressive stunts.
Posted by Christine at 11:00 PM