It's another new year! Time to make some resolutions you have every intention of keeping, but know you probably will not. I generally don't make them, but this year shall be different! I resolve to watch a new (to me) movie every day this year! How's that for an ambitious resolution that's probably not going to happen. Let's see how I do.

Ordinarily at this time of year, I like to delve into silent film. Silent films can be enjoyed at any time of year, but they just seem to call to me during the cold, dreary days of winter. On the other hand, I received several film noir collection sets for Christmas, in addition to an already large collection I own and have not yet explored, which is also calling to me. I have the will and the desire to keep this resolution. The question is whether or not I can make the time. 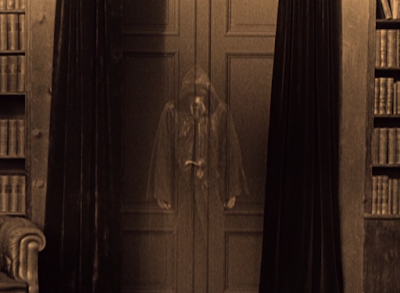 I decided to start off with a New Year's film from 100 years ago. I picked up The Phantom Carriage in 2018 during one of those Criterion Flash Sales I love so much, so it was about time I got around to watching it, and today was the perfect day for it. 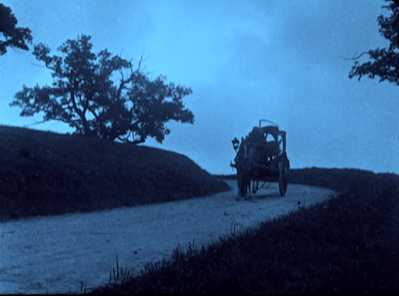 "You know, David, if I could send a message to mankind, I would like to send them a New Year's greeting. I would like them to dwell on a single New Year's prayer:  'Lord, please let my soul come to maturity before it is reaped.'" 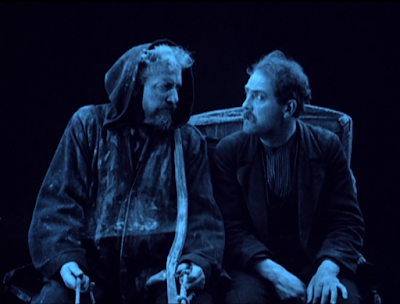 David Holm is a mean drunk, but he wasn't always that way. On New Year's Eve, a Salvation Army nurse is on her deathbed, asking for him. He is hanging out in a cemetery with some drinking buddies, recounting a legend from the guy who introduced him to drink, that states the sinful person who dies last on New Year's Eve is required to serve as driver of the Phantom Carriage for a year (where each day feels like 100 years) to collect souls for Death. After David refuses to go when summoned to the Salvation Army nurse, his buddies think that's pretty rotten, and one clubs him on the noggin with a bottle, causing him to die before the clock strikes twelve. As it turns out, the guy who told him the legend died on New Year's Eve the previous year, and he rolls up in the Phantom Carriage to be relieved by David. He feels responsible for his downfall and reminds David, in a series of flashbacks, of his life before he became a habitual drunkard, the people he hurt along the way, and the many chances at redemption he squandered. In the end, his soul appears to come to maturity.

This will have to be my go-to New Year's film from now on. It inspires me to reflect on the past year and consider how I can mature my soul in the coming year. The special effects are wonderfully employed, and the movie is captivating, with some surprising moments along the way. It's clear to see why it is held in such high regard, and reminds me that movies don't just entertain, provide escape, or inform, but can also inspire. This movie is currently playing on The Criterion Channel.

Posted by Christine at 9:30 PM

Thanks for the post. This is another great film I would have never watched (or maybe even heard of) without you. I was a little leery of a 1921 film going in, but the premise and that great score captivated me right away. The carriage itself in both the cover art and movie effect was also amazing. I'm not sure why I even subscribed to Criterion last year, but surprises like this have kept me entertained more than Netflix lately.

Thanks for your kind comment, Don! Another film directed by Victor Sjöström on the Channel that's worth a watch is He Who Gets Slapped with Lon Chaney. I subscribed to Criterion to watch films I might not ordinarily see otherwise. A few that are currently on my watchlist are The Seventh Victim, Blind Alley, and Hell's Heroes. Let me know if there's any you recommend adding to the list.

I just watched The Dark Past on Criterion last week, which was a remake of Blind Alley. So naturally, I had to watch Blind Alley. It is interesting to see how Lee J Cobb vs Ralph Bellamy interpreted the same role. You can also see some of the maturation of film from 1939 to 1948. It is easy to compare as they are based on a play and the action and much dialogue is identical (I swear I think a shot of a BEER sign is reused, which is very strange). Not sure I preferred one over the other.

Looking forward to 7th Victim. I watch a lot of horror, so this sounds great.

Thanks for the recommendation, Don! I had no idea there was a remake of Blind Alley. I look forward to seeing both of those movies.