If you've been following along, then you know that Saturday night is a time to honor and appreciate my most favorite horror movies. 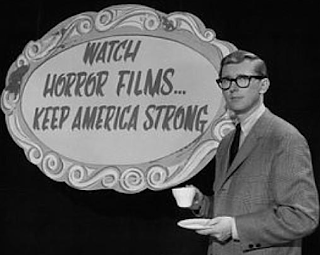 Tonight I am watching The Last Man on Earth with Vincent Price. I purchased The Vincent Price Collection II set expressly for this movie. I had previously only seen this copy from 2000, so I am looking forward to finally seeing it with greater clarity. It's dubbed, which gives it that same strange mismatched dialogue that we saw in Black Sunday. Apocalyptic stories are some of my favorites.

"Theoretical? Do I have to remind you that theory is the beginning of solution?"

There is a nice interview with Richard Matheson on this Blu-Ray in which he explains that he was not happy with the screenplay, and had his name removed from the credits as a result. Since he wanted to retain the residuals, he had himself credited as Logan Swanson. It's been quite a while since I read his story, I Am Legend, that this movie is based on, and as much as I enjoy the film, it pales in comparison to the book. It's what you'd expect since much of the action occurs in the thoughts going on in this guy's head, which is hard to effectively convey in a film.

We see the sun rise over a desolate city that's littered with corpses and a helpful church marquee announcing the end of the world. Back before Night of the Living Dead, it had to be a jarring image. We glimpse a man through a window who could be another corpse, except he awakens to an alarm, and we learn from the calendars he's hastily drawn on his wall that it's been three years since everyone around him perished.