I'm glad to be back at it tonight. I've decided to watch El Vampiro in keeping with my beginning of October vampire fest. I probably have enough vampire movies to watch one every day for the whole month, but I will be switching it up since it's good to have some balance in one's horror regimen. 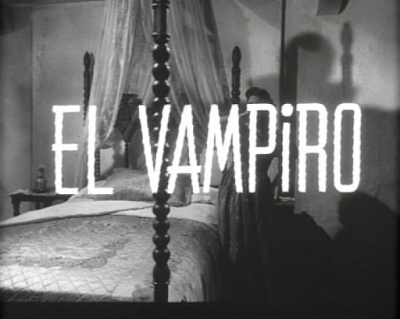 This movie can be found on the Vampire Collection set, which also contains the sequel, El ataúd del Vampiro. I received this set from brother John quite a few years ago, and had never heard of this film and would not have discovered the joy of Mexican horror if it weren't for him. It's been a number of years since I've seen it last, so I'm looking forward to reacquainting myself with it. 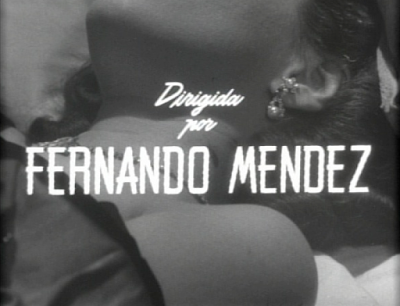 This movie has got the beautiful imagery of a Universal Picture, but more of the toothsome horror of a Hammer film. The music is suspenseful and emphatic. It begins wonderfully with a vampire looking up at an open door from a courtyard. Inside, there is a woman who appears to be unnerved. The vampire morphs into a bat and flies into her open doorway. She screams and he attacks her on the bed, draining her and leaving. 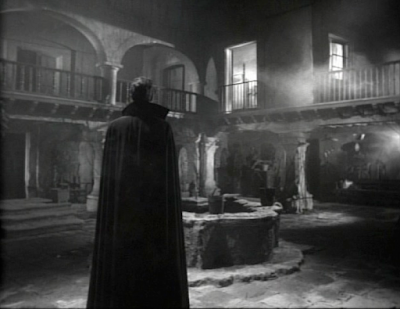 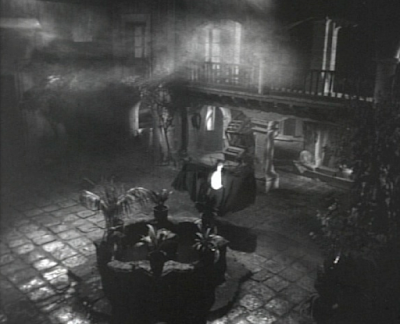 A box of soil is being unloaded from a train to be delivered to Sr. M. Duval. Marta González is also stepping off the train on her way to the Sicomoros. She is told that her uncle, who was supposed to pick her up, came at noon but left because of the landslide, and there is no one who can take her to the Sicomoros, since people don't go out after sunset. Despite the fact that her aunt is very ill, she is forced to wait until the next day to get a ride, along with a friendly fellow, who is also stranded.

A man driving a wagon comes to collect the box of soil and Marta and her new friend comment on how ugly he is. The station master tells them that the soil is for a Mr. Duval who's lived there for about 10 years, who is an odd fellow that only goes out at night and wears a cape like the fellow más feo who is picking up the soil.

The chivalrous guy decides to try and secure a ride for Marta from the wagon driver, suggesting she's pretty and would be good company. When the driver finds out she's on her way to the Sicomoros, he agrees to take her. As the kind fellow loads up her luggage on top of the box of soil, he also hops on  and says he's going where she's going.

A funeral procession is walking through the courtyard we saw in the opening scene and the pallbearers are carrying a coffin outside the walls of the hacienda. After they pass, a veiled woman in black suddenly materializes, and is the same woman we saw getting a vampire bite at the beginning of the movie.

As the coffin is taken to the crypt, the grieving man requests to see the woman in the coffin, who happens to be his sister, one last time. A rather large crucifix is resting on her chest and another woman removes a pouch and says she'll keep it with her. Her coffin is placed in the wall and sealed. As the mourners leave, the woman who took the pouch opens it and removes a piece of paper and shows it to Anselmo, who looks shocked to read it.

The wagon driver stops and tosses the luggage off the wagon, telling Marta and her friend they are getting off, even though they are not at the Sicomoros. They offer to pay the man to take them there, but he refuses. When Marta tells the nice man accompanying her that it will take them a half hour to get to the Sicomoros, he suggests they know each other better if they are to walk through a foggy deserted place.

We learn his name is Enrique, that he has a mole on his back, he hates the countryside and he's a commercial traveler. We begin finding out that Marta works in a store, but the veiled woman in black appears suddenly behind them and follows, unbeknownst to them, but with dramatic music that drowns Marta out. The music in this film really ups the ante on the fear factor.

Marta is relaying the purpose for her trip to Enrique as he struggles to carry her oversized suitcase. She tells him her uncle Emilio told her to come, that he's not the husband of the sick aunt, but her brother, and that she has another aunt living there, and neither aunt is married. Marta tells how her sick aunt raised her and was like a mother to her and Enrique asks if the reason they are not married is because they are ugly. Marta says they were very pretty when they were young, but now they're too old. She also tells them her uncle traveled the world and only came to the Sicomoros 2 months ago. The woman in black appears behind them again. She seems to stir up gusts of wind wherever she goes.

Marta describes the Hacienda to Enrique, recalling the yard full of flowers, cages with birds and the fountain. As they approach, the music grows more ominous and spooky. Enrique is looking around and has the feeling of being followed. Anselmo lets them in the gate when he finds out it's Marta and she enters to see a very different place than the one she was just describing to Enrique. Marta asks why it's deserted and Anslemo explains that the people have left town and its hard to get anyone to work in the Hacienda.

Marta's uncle is happy to see her, and the woman in the veil materializes outside the gate and morphs into a bat and then reappears on the staircase inside, asking Marta if she gets a hug. Marta looks concerned and her uncle needs to remind her that it's her aunt, Eloísa. She greets her and remarks how she looks the same as when she left. She asks about her aunt, María Teresa, and is told she died the day before and was buried, causing Marta to cry and hug her aunt, who doesn't appear to want her sobbing on her shoulder, and takes her upstairs.

Enrique tells the uncle that he's leaving, and Marta introduces him as the kind gentleman who brought her from the station, and she invites him to stay the night. He says he'll go to a hotel, but Uncle Emilio informs him that there haven't been hotels in awhile, esta es su casa, and he convinces him to stay.