I think I should get a job watching movies. Let me know if you're interested in hiring me. Oh well. It was worth a try. I've been applying my writing talents to grade reports lately, which takes an inordinate amount of time and has left me devoid of energy and vocabulary. It has also left little time for the luxury of movie viewing. I am limping back into action tonight and it seemed fitting to revisit The Omen. It's been about 30 years since I've seen this 40 year old movie, and it's always fun to watch something that I haven't seen since I was an impressionable young lass to compare how differently I perceive it now. 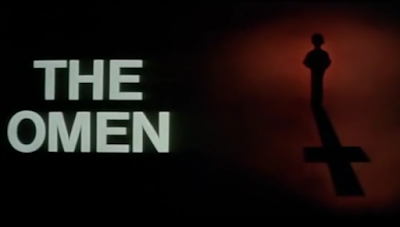 Robert Thorn has learned that his wife delivered a live baby, but the child stopped breathing and died. His wife is apparently unaware, and the priest suggests that he adopt a baby that was born the same day, whose mother happened to expire at the same moment his baby did, and pass it off as his own, leaving his wife none the wiser. There are all sorts of things wrong with this picture. What kind of priest gives a baby away and suggests that a man lie to his wife? Obviously there is evil afoot. 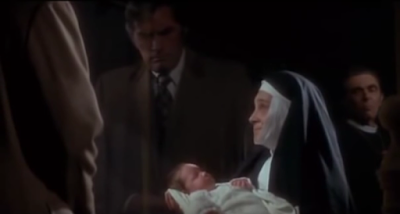 Robert gets a job as British ambassador and the family moves to Great Britain. Their first scare with their little boy, Damien, happens as they are out walking near a stream at their new home, and find that their little one, who they expected to be toddling after them is missing. Turns out the little tyke was hanging back by a tree waiting for them to even notice he was not there. It is odd that they would go for a walk next to a body of water, allowing a 2 or 3 year old child to follow behind them out of sight. Perhaps they are not the most astute parents. 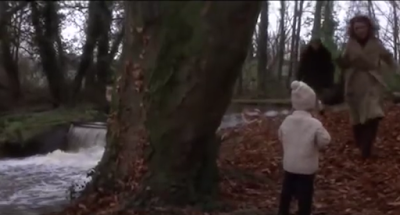 We flash forward through photos of Damien with his mom and dad as he grows older and rejoin him at his extravagant birthday party filled with lots of guests, a clown and paparazzi. After his mom takes him from his nanny, the caregiver wanders off and exchanges a few meaningful looks with a stray dog. Next we know, she's calling Damien to get his attention, telling him she loves him and that it's all for him, as she jumps and hangs herself from the side of the house. It's what every demon possessed child hopes for on his birthday. 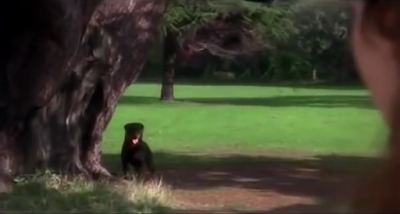 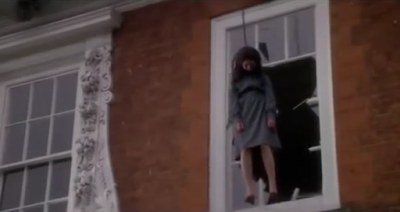 Afterward, Father Brennan comes to visit Robert from Rome to warn him that he's got the son of the devil, that he's killed once and will kill again. He told him he was at the hospital and witnessed the child's birth and advises Roger to take communion and fight him. Robert calls security to escort him out of the building. 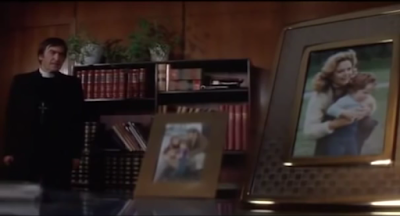 Mrs. Baylock shows up of her own accord to make herself Damien's governess. The Thorns initially question how she came to them, but accept her explanation that the agency automatically sent her. 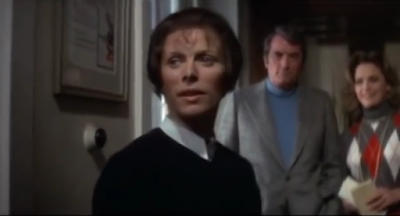 Damien is making himself comfortable close to the flames when she walks in and tells him to have no fear since she's there to protect him. He gets a devilish smirk. 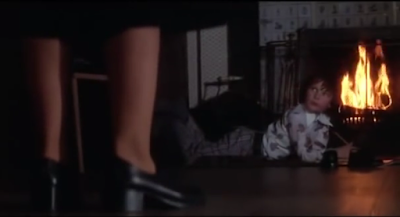 When Katherine asks Mrs. Baylock to send Damien down to accompany them to church for a wedding, the new governess balks and tries to keep the young imp from having to go, but Mrs. Thorn gets her way. He becomes agitated as they near the church, and when it's time to get out of the car he throws a major hissy fit and attacks his mother, prompting his dad to jump back in the car and tell the driver to leave. 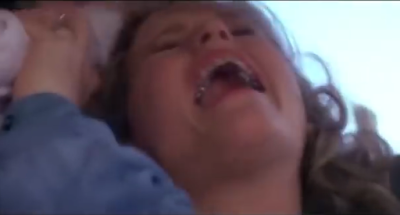 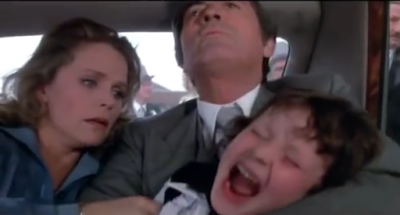 Katherine claims there's nothing wrong with Damien, that he's a healthy boy and that he just had a bad moment. These folks need some serious parenting help. Robert remarks that it is unusual that he's never been sick a day in his life. As Robert goes to Damien's room, he is greeted by the growling demon dog and Mrs. Baylock informs him that the dog was found outside and Damien loves him. Robert tells her that they don't need a dog and if they do, he'll pick one out himself, and instructs her to call the RSPCA to find him another home. I am wondering how long it will take them to fire Mrs. Baylock. 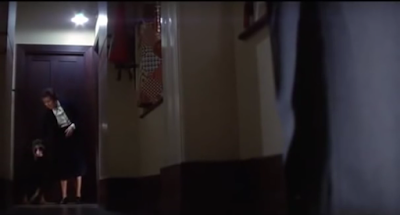 Katherine takes Damien to the animal park, but the little demon frightens the giraffes and makes the baboons freak out and attack their car. Katherine denies that anything is wrong with Damien and believes that she has fears and needs to see a psychiatrist. Robert agrees to help her find professional help. 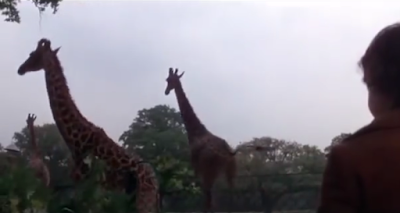 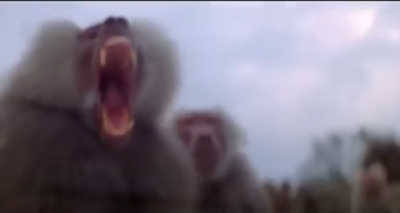 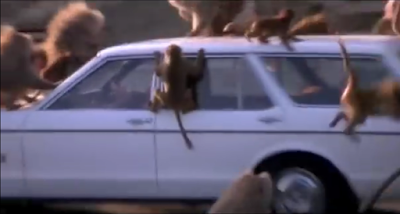 Father Brennan catches up to Robert at a rugby match and implores him to meet him the next day, warning him that his wife is in danger and she'll die if he doesn't come. 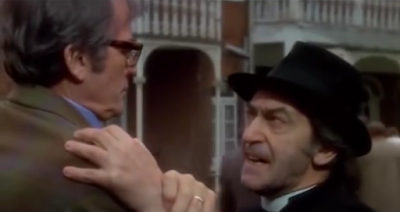 Robert goes to meet with him and he quotes from Revelations and then tells Robert to go to Megiddo and meet with the old man Bugenhagen, who is the only one who can describe how the child possessed by Satan must die. Robert stops him to ask why he said his wife is in danger. The priest tells him his wife is pregnant and that his son, the son of the devil, will kill the unborn child, and then his wife, and when he's certain to inherit all that is Robert's, he will kill him as well, and will use his power and wealth to establish his kingdom on earth. Robert is not buying it, and tells him he doesn't want to see him again, to which he responds that he'll see him in hell. 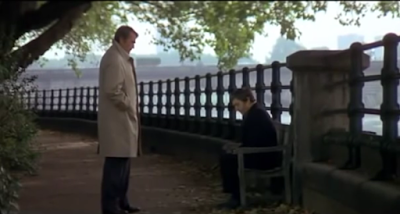 A sudden storm blows up, inspiring Father Brennan to brandish his cross, causing a tree branch to explode in flame and drop in front of him. He runs to a cemetery and heads for the chapel for protection as lightning strikes a spire on top and it falls and pierces through him. The storm immediately stops as he is impaled by the shaft of metal and held to the ground. It's pretty horrible...in a wonderful sort of way. 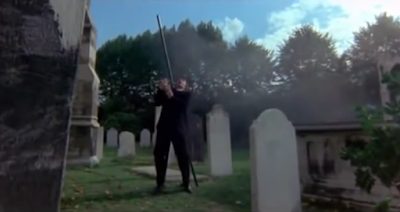 Damien is being loud while playing with balls on the pool table and Katherine calls Mrs. Baylock to take him away. She lets Robert know she is pregnant and wants his permission to get an abortion. He seems shocked after hearing Father Brennan's foretelling. He sees that Father Brennan got skewered in the newspaper (kind of a graphic photo for a newspaper). He meets with her doctor and finds out that Katherine thinks Damien is evil and is not her child. Robert does not agree to the abortion as he said it was foretold and he wants to fight it. He's obviously taking Father Brennan seriously now. 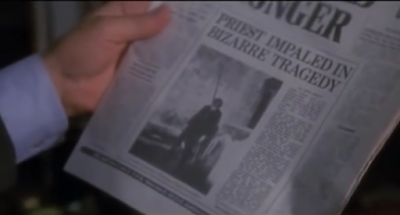 Damien is riding his trike in circles like a whirling dervish until Mrs. Baylock releases him from the room to ride down the hall and knock his mother off the banister, causing her to break her arm and lose her unborn child. Robert visits Katherine in the hospital and she begs him not to let him kill her. 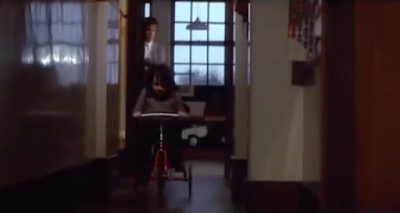