A Trap for Santa is a short film by D.W. Griffith, who's well known for developing many film techniques that are used today. I have not seen any of his feature length films, which may be unusual for a silent film enthusiast, but I have taken a different path to silent film. This is one of several short films of his I've seen, most of which have been thought-provoking films that involve social issues. This short film can be found on A Christmas Past, a collection of Christmas silent movies, which gives an interesting look at Christmases in the early 1900s. Al Kryszak is responsible for the original score, using violins, viola, cello, piano, harp, and a handbell choir. At times it is pleasant and other times discordant. I don't find that it always fits the action onscreen, but it's got a holiday vibe. 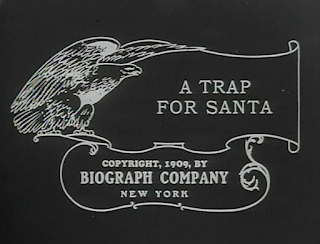 Before we even see the family we are informed that there is no work for the father (Henry B. Walthall), and that misery and want are the family's lot. The mother certainly looks miserable while their little waif of a daughter appears to be gnawing on a chunk of bread. 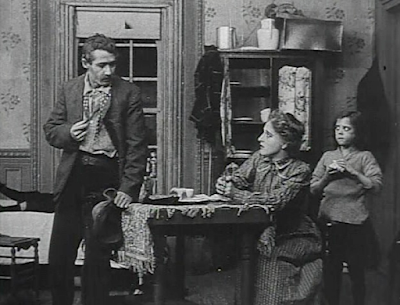 When Mom asks the destitute daddy a question, he flips out, causing the mom and daughter to burst into tears. 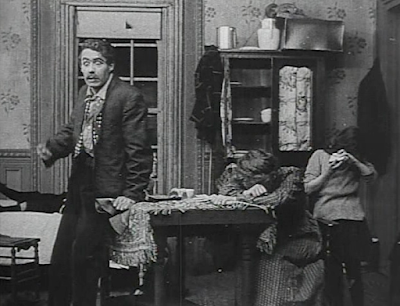 He does the only thing a man can do when faced with tearful womenfolk and a crushed spirit--he heads over to the local bar to drown his sorrows. The cigar chomping bartender refuses to serve the penniless fellow until a couple of lushes take pity on him and invite him over to share their bottle. 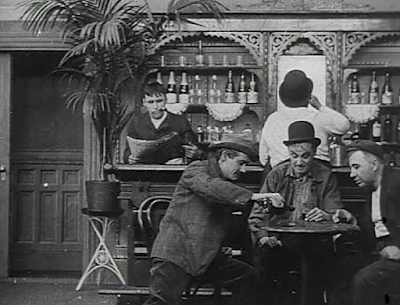 Poppa comes home as tight as a boiled owl and mama gives him the what for. 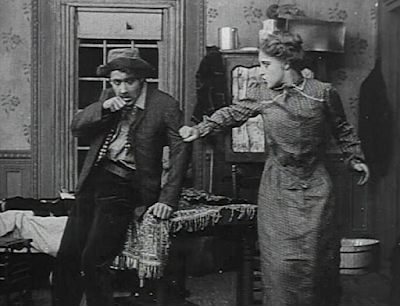 He bids farewell to his children and leaves the house of sorrow. 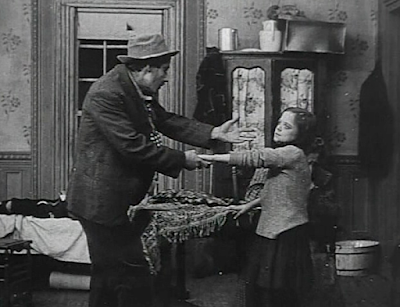 He steps outside the house and finds a scrap of paper to scribble a note of farewell to his wife, Helen, informing her she'll be better off without him and wishes that God may help her. What a champ. 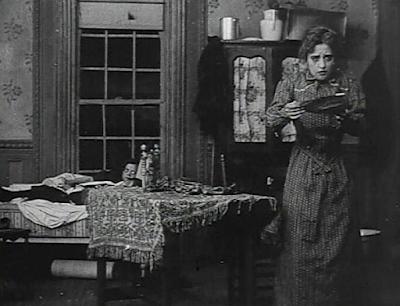 Mother tears up the note and tries to put a happy face on for the kids. 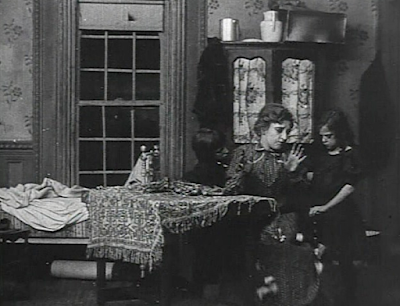 Meanwhile, Father goes back to the bar to nap on the table and gets tossed out by bartender, Mack Sennet. 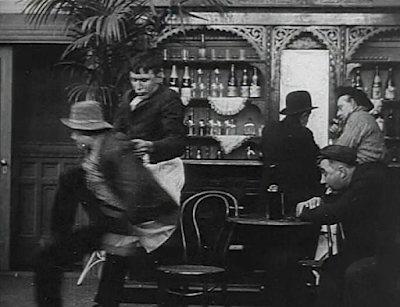 The mother brings her daughter to town to try and find gainful work at the employment agency, leaving her son at home to root around in the cupboards and gnaw on a loaf of bread. She does not receive any job offers. 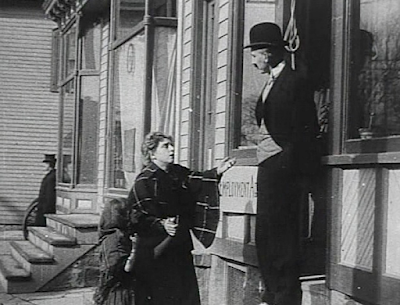 When they return home, they find that the little boy has eaten the last bit of bread in the house. 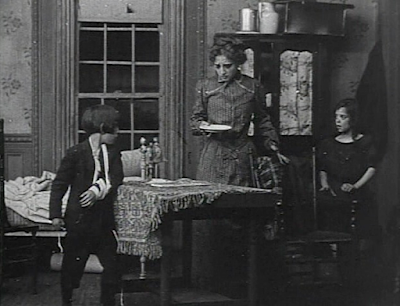 Fortunately, Momma gets news that her aunt's estate was settled, leaving her with a moderate fortune. 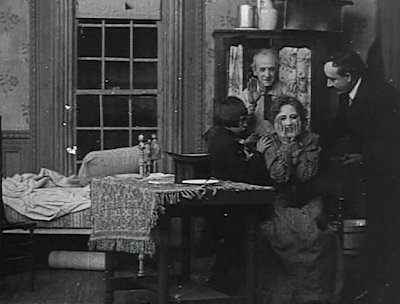 She does not waste any time getting herself and the kids fitted into the finest fashions and set up with new digs. The only drawback to their new accommodations is that there is no chimney and Santa will have to come in through the window. Mama instructs them not to peek. 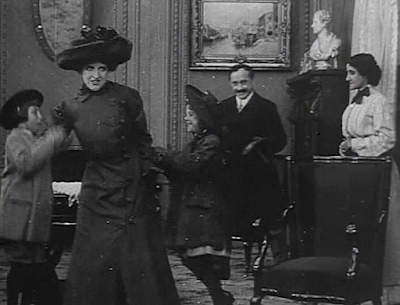 She tucks them into bed and pokes their sweet little eyes closed and leaves them nestled in their bed with visions of sugar plums and Santa breaking in through the window. 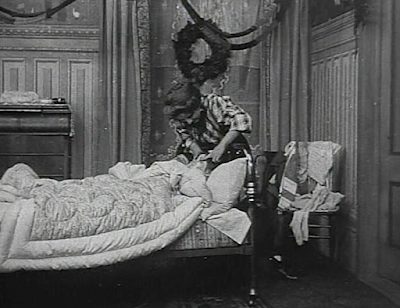 The naughty children sneak out of bed to set a trap for Santa. 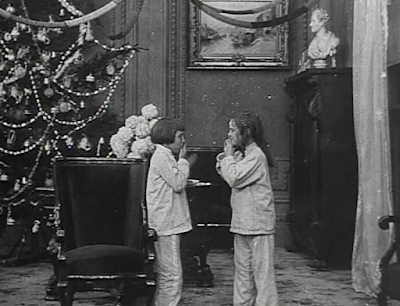 The clever little ones set a tub underneath the window with a framed picture on top. 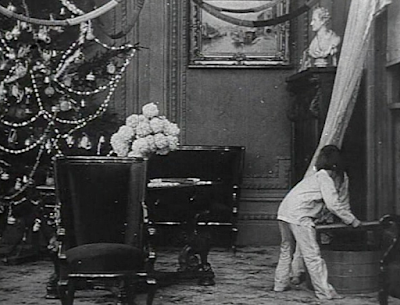 Meanwhile, Mama is doing her best to take on the Santa role, but breaks down, possibly thinking of the man who used to do the job. 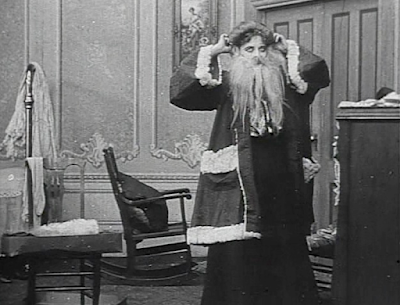 The kids attach a string to the window and tie it to the little girl's big toe, so that they're sure to be alerted when Santa opens the window to make his delivery. 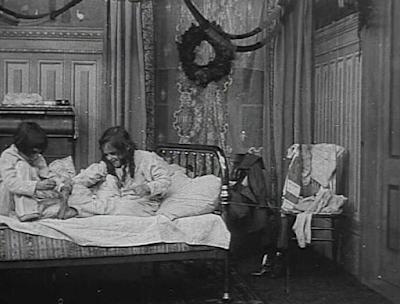 We are informed that the father is forced to desperate deeds because of grim misfortune, and we see him breaking into a house through a window, which just happens to be the house his wife and children are living in. The kids are ecstatic that their security system has worked, but unfortunately their boisterous excitement has alerted their mother, who sends them back to bed. 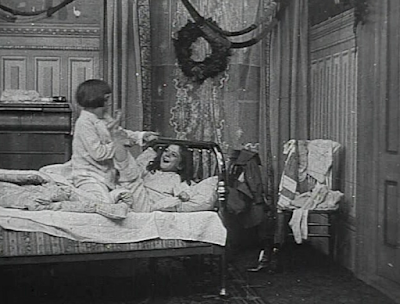 She is shocked to find her own husband sneaking in through the window. He begs her forgiveness, and when she remains unresponsive, he turns to go back through the window. 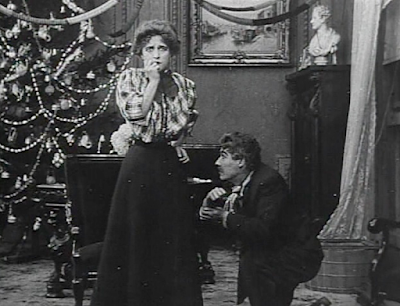 She stops him, reaches out, and they embrace. She suddenly gets the idea to have him dress up as Santa. 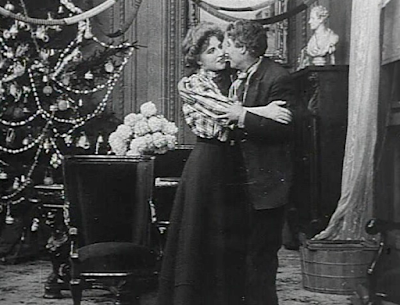 Santa-daddy gets into the children's trap while mother goes to wake them up to see Santa. They are bouncing off the walls as they help Santa from the tub and the family shares a happy embrace. 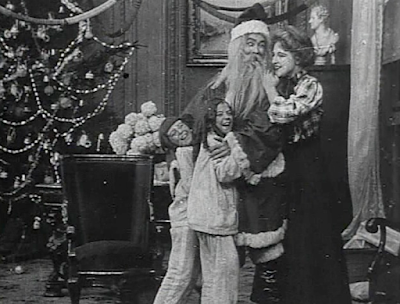 This is a silent film that uses fewer intertitles than I would like. While it can be frustrating, it's what can also make a silent movie a more engaging experience by forcing you to really think about what is happening on screen and interpret the action that is being portrayed by looks and gestures. This may be what many people do not enjoy about silent films.

I find this short film interesting for its glimpse of the past. The father is treated in a sympathetic light, even though he chooses to go get drunk instead of redoubling his efforts to try and provide for his family. When his wife calls him on it, he decides to desert the family. It could be that there was truly no work for him, leaving him little else to do, but saying that the family would be better off without him seems to be more of a selfish choice, rather than the selfless one he claimed it to be. The mother does her best to try and find a way to provide for the children and gets them nicely set up when she receives the money from her aunt's estate.If she had not had this good fortune, the prospects for the family would have been dire.

It's important to remember that women were still ten years away from being able to vote when this film was made. While it may be the spirit of Christmas that enabled her to forgive him, there may also have been the desire to reconcile for a sense of security, to keep the family intact, and because of her loneliness. While it seems to be an upbeat ending, it leads one to wonder what will happen to the family once Christmas is over. It's hard not to imagine this lout squandering her inheritance by gambling it away or using it up at the local tavern, but in the spirit of Christmas, we'll try to believe in the best for this unfortunate fellow who doesn't quite have the resilience or fearlessness of his wife.