It's been one of those days that's left me depleted. I don't know how I found myself watching this movie. I suppose it's because it was streaming on Amazon Prime and it was easy to click on after watching an episode of Dark Shadows. If I had scrolled to the right a few more times on my watchlist, I might have watched My Favorite Martian instead, but I have been curious to see this well-received film and went with the effortless choice.

I don't typically enjoy watching movies with people brutally killing each other, though my horror collection suggests otherwise, and it's to be expected from a cops and robbers movie.

I was surprised to enjoy this film. I enjoyed the visual style and the way the story was allowed to unfold. I also liked that not everything is explained, leaving viewers to wonder. I didn't enjoy the misogyny, the racist remarks, or torture and killing of innocents, but accept it as part of the depiction of these depraved characters, who get their just dues in the end. 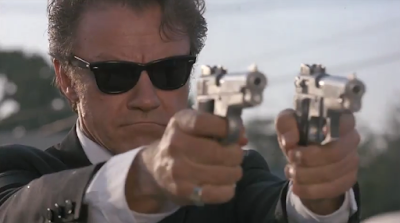 It had its moments of coldblooded brutality that were unpleasant to watch, especially when paired with innocuous 70s music. 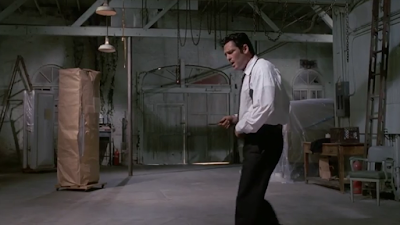 The acting is well done and it's interesting to see each character develop. I can't help wondering if skinny ties will ever make a comeback. 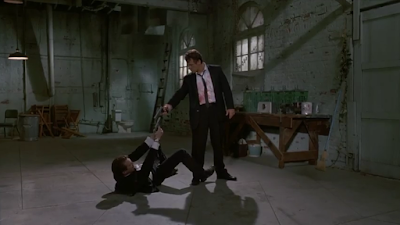 I'm somewhat confused about who shot who in the standoff. It looks like Joe shot Mr. Orange, and Mr. White shot Joe, while Eddie shoots Mr. White, but who shot Eddie?

Everyone is dead, but Mr. Pink is in the pink. I'd like to think that he shot Eddie, but after looking it up, I found out that Mr. White was supposed to have shot him after shooting Joe.

I like the way we are left to determine the fate of Mr. Pink. I believe he was also taken out, due to the sounds of gunshots and sirens after he left the building. This is a movie that calls for a second viewing, after the chronology has been better understood from the first viewing, and because there's so much going on that I suspect there are details that may be seen on second viewing that were missed on the first.
Posted by Christine at 11:00 PM