So much for making time to watch more movies. As I mentioned in my last post, I wanted to start keeping track of the movies I watch to motivate myself to get through all the movies I've acquired and not yet seen by the end of 2018. Yet here it is the middle of February and I still haven't gotten started with my posts. As usual, work and circumstances of life tend to interfere. I know how Henry Bemis feels. It's time to retreat to the vault. What's worse, or maybe better, is that I continue to acquire more movies (curse you Criterion Flash Sale! I mean, bless you!).

I've been toying with the idea of logging my movie viewing for awhile, but haven't attempted it because it seems like something that will only be interesting to me. On the other hand, I've got some unusual and diverse viewing habits (I've seen Les portes de la nuit, They Live, In the Mouth of Madness, The Prince of Darkness, Tomorrow is Forever, Maigret Sets a Trap, Twin Peaks: Fire Walk with Me, Dawn of the Dead, and Lon Chaney: Before the Thousand Faces so far this year), and that might be somewhat fascinating to someone. So, I'm starting yet another soon to be forgotten feature that's brilliantly titled, What I'm Watching. I intend to post a short response with a few pictures, which will be a real challenge for me. We'll see if there's any longevity to this new venture. 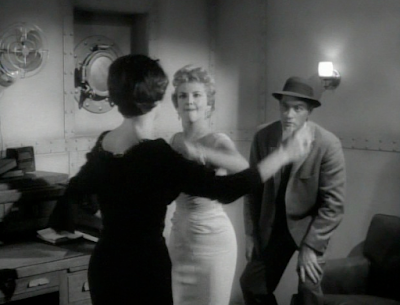 I may include some TV shows, because I've got quite a few of those to go through as well, including Mickey Spillane's Mike Hammer with Darren McGavin, the last season of Perry Mason, Decoy, The Defenders, The Dick Van Dyke Show and Season 7 of Alfred Hitchcock Presents. Unfortunately, I have many other things to do besides sitting around reading books and watching movies, so we'll see how well I can keep up. Past history should cause readers to have low expectations. This blog is a testament to my unreliability in general. Hopefully the unpredictability helps build anticipation.
Posted by Christine at 8:00 PM