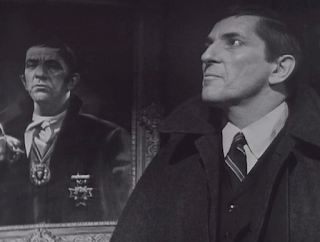 The 50th anniversary of this show may open a massive TV time portal with the introduction of Dark Shadows Before I Die, a completely insane inspired attempt to blog about each of the 1225 episodes on the date of its anniversary, spearheaded by John Scoleri, who developed a fan following for his daily review blogs written with co-host Peter Enfantino about Thriller, The Outer Limits, Kolchak-The Night Stalker and Batman. John was flying solo until he invited his delightful sister (c'est moi), a Dark Shadows veteran, to participate in this overwhelming adventure. Hopefully John's longtime buddy Peter will decide to join the merrymaking.


"Paint It Black" was released May 6, 1966, the month prior to the premiere of Dark Shadows.


It may seem daunting to devote oneself to five years of viewing and daily blogging, but the episodes are short and a task as great as this is better accomplished in small doses with many supporters, or it has the potential of becoming a chore and making the participants unhappy.

It's not a show for everyone, but there is a reason why this show is still watched, still talked about, and has the following that it does. For fans of Dan Curtis, you will notice elements of Burnt Offerings and Kolchak, among other Dan Curtis films. If you enjoy classic literature, tales of the supernatural, and have a fondness for classic horror, this is a show for you. I hope you will be inspired to join us and find out for yourself.

You can rent discs at Netflix or find it on Amazon Video or YouTube. Hulu has episodes available beginning with Episode 210. Put on something groovy and get ready to look back at 1966.


Update: The link to information on Trans Portals is provided solely for your entertainment and does not constitute endorsement, recommendation or favoring by the Aging Broad. If you decide to access time portals, I hope you will adhere to the Temporal Prime Directive. Can you tell I'm a fan of time travel stories?
Posted by Christine at 5:00 AM