When I picked up this film, I had no idea it would be one I would watch twice within a week. That is pretty rare for me to do, especially with a contemporary film, but this is a movie that lends itself to being seen again to pick up all the things that were missed on first viewing. I appreciate the lush visuals, unsettling score, and the many layers to contemplate. It has the feel of a folk horror film from the 70s. It is shocking, unsettling and perturbingly satisfying.

In this film, Dani experiences a tragic loss and ends up tagging along with her boyfriend and his mates to attend a once in a lifetime midsummer festival in Sweden. While it's clear that all is not right as attendees from outside the commune begin to disappear one by one, their fate only becomes known late in the film. This movie will easily become a favorite film that will hold up to repeated viewing. I highly recommend it to anyone who appreciates folk horror. 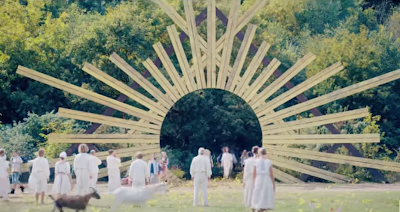 Posted by Christine at 2:11 PM

Christine, I'm so glad you enjoyed it! I really liked it as well. I have friends whose reactions to the movie have been all over the map, ranging from "loved it" to "hated it." I think it's a film whose multiple layers are revealed on repeat viewings, and I agree it recalls the folk horror films of the 1970s, such as "The Wicker Man" and "Blood on Satan's Claw."

I just read your thorough and entertaining post on Midsommar over at John V's Eclectic Avenue. Clearly, I need to be keeping up with your blog more often! We have the same eclectic tastes. I also picked up Hereditary and am looking forward to seeing that one soon.